Studio apartments are small one-room homes that still offer the luxury of privacy and standard amenities. Studios are popular options in dense cities, such as San Franciso or New York, because they often offer cheaper solutions to downtown living. These types of apartments come in a range of styles, sizes, and configurations that can influence the cost and convenience of living in one. So whether you’re a first-time renter, moving to a city with a high cost of living, or possibly just prefer a minimal living space – a studio apartment may be an excellent choice for you.

But what exactly is (and isn’t) a studio apartment? And what makes a studio a good choice for some but not others? Let’s break down what studio apartments are, along with the pros and cons, to help you decide if this style of home is right for you. 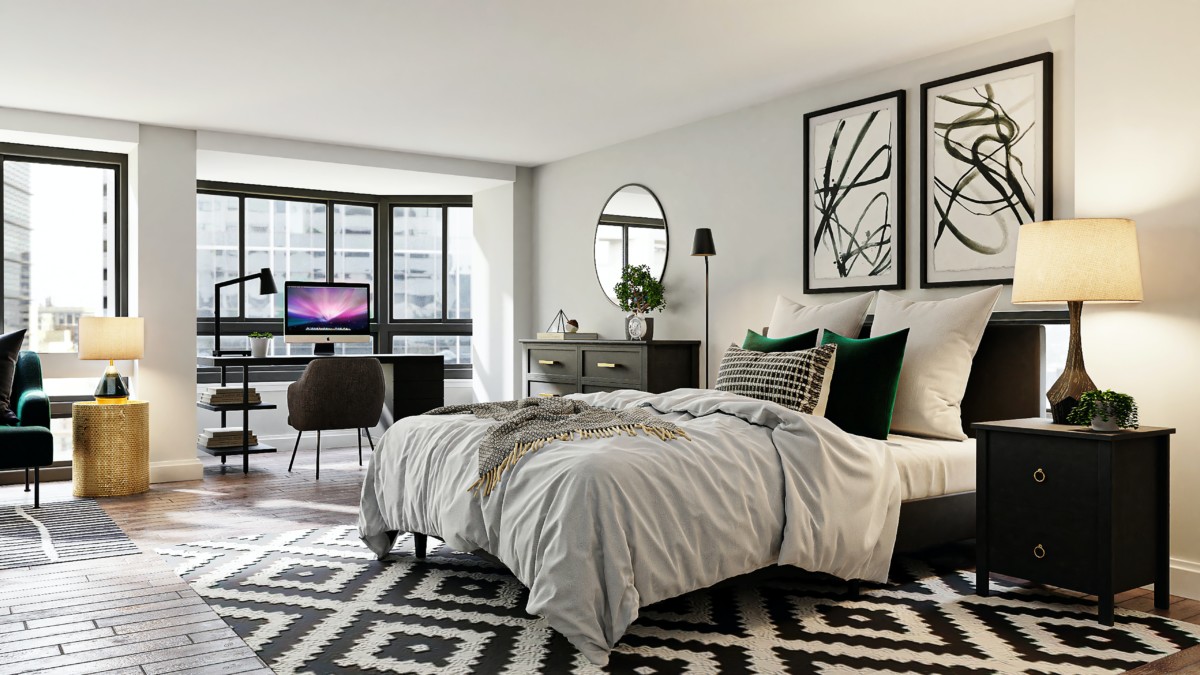 What constitutes a studio apartment?

A studio apartment is a small apartment that consists of one large room that serves as a kitchen, dining room, living room, and bedroom. The only room with a wall and a door is the bathroom. The size of a studio apartment tends to be between 400 and 700 square feet but can sometimes be much larger, especially when they exist in a converted space.

Studios don’t have dividers between rooms, though sometimes kitchen areas have a partial wall. If you want the feeling of separate rooms, you’ll need to get creative with furniture placement, while still leaving some open space to live comfortably..

Studio apartments come in many shapes and sizes. Most studios are less than 600 square feet but can be larger. During the housing shortage in the 1970s, for example, many factories and other commercial buildings were converted into apartments. This gave rise to the phenomenally popular loft apartment, which often exceeds 1000 square feet of space. A loft can be a studio apartment, but they can also have rooms separated by walls and doors.

The line layout is probably the most common studio floor plan and is arranged in a long rectangle. The entry could be in the middle of the long wall or at one end of the apartment. The interior has no natural delineations, so you’ll need to arrange furniture to create “rooms” within your space. Similarly, a square or box-shaped apartment is also common and doesn’t offer clearly defined spaces.

The L-shaped studio is also a common layout. In it, the floor plan creates an “L” by moving galley-style through the main living areas (kitchen, dining area, living room) and curves around into a bedroom area. This is an ideal shape for people looking for greater distinction between the bedroom and other areas of the home. Other shapes, like the u-shape and h-shape, are less common in studio apartments but can be found in some areas. 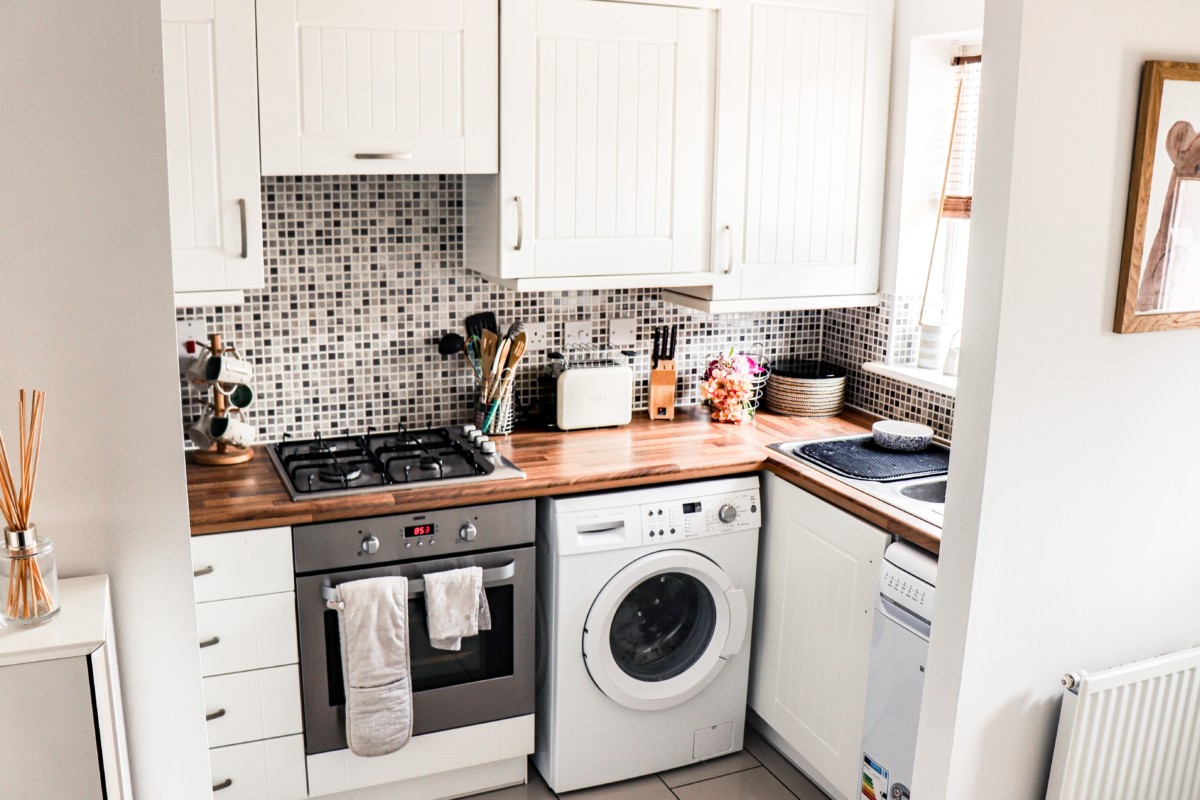 Pros and cons: Is it worth it to live in a studio apartment?

Whether or not a studio is worth it will depend on how you use your space and what you need most from your apartment. Consider the advantages and disadvantages outlined below.

Pros of living in a studio apartment

Cons of living in a studio apartment

Studio apartment vs. a 1-bedroom apartment

Studios do not have walls separating the living areas of the home (except for the bathroom, of course). They also tend to have fewer closets, smaller kitchens, and smaller bathrooms, too.

Is a studio apartment and an efficiency apartment the same thing?

Efficiency apartments also tend to be newer builds in bustling city centers. Newer high-rise apartment buildings are incorporating efficiencies into their design, catering to people who travel a lot for work or need a pied-à-terre.

What’s the difference between a studio and a micro-apartment?

Like efficiency apartments, micro-apartments are smaller than a studio. At 350 square feet (or less), they usually have a kitchenette instead of a full kitchen. The bathroom also tends to be smaller and only offers a shower stall instead of a bathtub.

Many micro-apartments are built with luxury in mind and are situated in highly-desirable areas. For this reason, you’re not going to find rock-bottom rents with a micro-apartment. However, you will be able to rent one for less than a one-bedroom apartment in the same area. How to decide if a studio apartment is right for you

Studios aren’t right for everyone, but many people will find that a studio apartment isn’t much different from a one-bedroom. Understanding what you need and want from your home is the first step to finding ways to make that work in a studio.

The best way to begin is by imagining your ideal living situation. What kind of home would you live in if nothing else stood in your way? Consider what you value in that ideal home and how you can recreate it in a smaller space. For example, if the kitchen is the heart of your home, you should make sure that your next apartment has full-sized appliances.

For every obstacle, there is a solution. But some things just aren’t worth dealing with. For example, if you absolutely cannot downsize your stuff due to your work or your passions, opting for a larger place is usually better than getting a studio and a storage unit. However, if being in the heart of the city is at the top of your list and you’re on a tight budget, then a studio apartment could be a great option for you.

How to maximize your living space in a studio apartment

Small-space living is not a new trend and there are plenty of solutions to make your studio apartment feel bigger than it is. Here are some tried-and-true ways to get the most out of your tiny apartment:

The post What Is a Studio Apartment and Is It the Right Choice for You? appeared first on Redfin | Real Estate Tips for Home Buying, Selling & More.

Robert Powell’s Retirement Portfolio: Are you saving more than you need for retirement?

What Is A Crypto Credit Card? Should You Have One

What is Apple Stage Manager and how is it used?

She rose from an intern at the construction to become a principal and leader of major projects.

The company will occupy the second floor of a 12-story Flatiron office property.

The plant closure comes as companies around the nation implement similar cost-saving strategies amid economic uncertainty.

The 9 Fastest-Growing Cities in Ohio