The Bungalow house is a classic home style, taking a queue from the Craftsman style house popularized during the early 1900s. Often used to describe a smaller, single-story house with minimal detail, a bungalow house style is much more than just a simple style. You’ll find these charming homes in many different architectural styles and appearances, suitable for first-time homebuyers or those looking for a smaller home to call their own. Let’s look at what’s helped the bungalow home stand the test of time as one of many popular house styles. 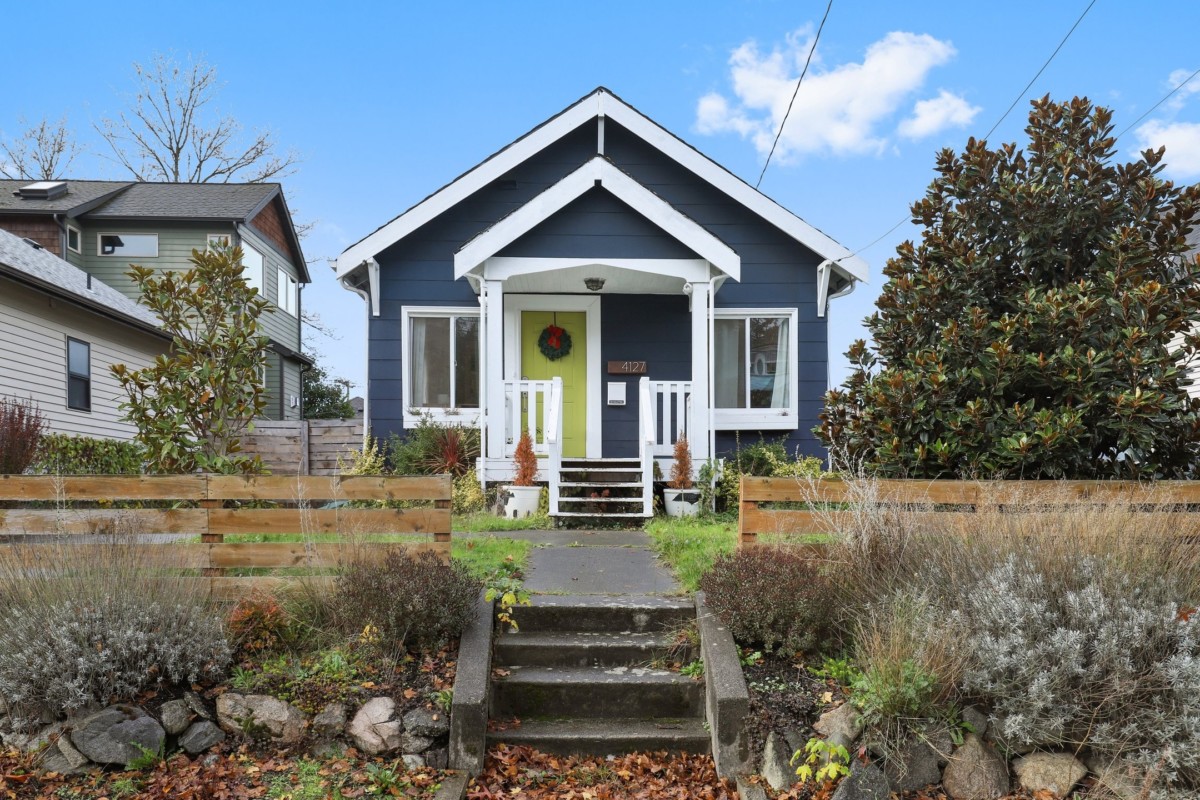 What is the bungalow house style?

Bungalow house styles are typically single-story homes with an open concept living area and 2-3 bedrooms built on the same level. The bungalow was a popular home choice due to its relative affordability and smaller size. They may also feature an attic space, but this depends on the steepness of the classic pitched, gabled roof. Typically a bungalow will have a raised foundation, with steps leading up to the house and covered porch space.

While the bungalow has its roots in the Craftsman style, it originated in India. Taking its name from the Hindustani word “Bangala,” translating to “belonging to Bengal,” the bungalow’s true beginnings started in Bengal, India, during the 19th century. During the British colonial occupation, travelers often stayed in these style homes when visiting the country. As a result, bungalow homes became popular in England, eventually gaining traction in the US during the early 20th century.

Bungalow homes grew as an offshoot of the “Craftsman” home, popularized at the height of the Arts and Crafts movement. During this time, these houses were often found in various Arts and Crafts magazines and blueprints. The bungalow was a relatively easy and affordable home to build – so much so that homebuyers could even purchase bungalow kits through companies like Sears. Due to their widespread availability, bungalow homes are found in many cities and states across the US. Bungalow houses vary depending on the region you’re buying a home in – think a California bungalow in Sacramento, CA, or a Craftsman bungalow in Milwaukee, WI. But there are several common features that create the overarching bungalow look, regardless of the architectural style that the home follows.

Many bungalows are single story, although some may have an unfinished basement or an additional half-story that includes an attic space. Prominent exterior features include a covered front porch, often with columns, a pitched and gabled roof, and lots of windows such as dormer windows at the top of the house.

Bungalow homes tend to be smaller in square footage, but they make up for it with open floor plans, built-in cabinets and shelving, and custom features like window seats found throughout the living space.

While the bungalow takes inspiration from the craftsman style, there are still other variations of the bungalow style home. Let’s take a look at six of the most popular bungalow house plans. 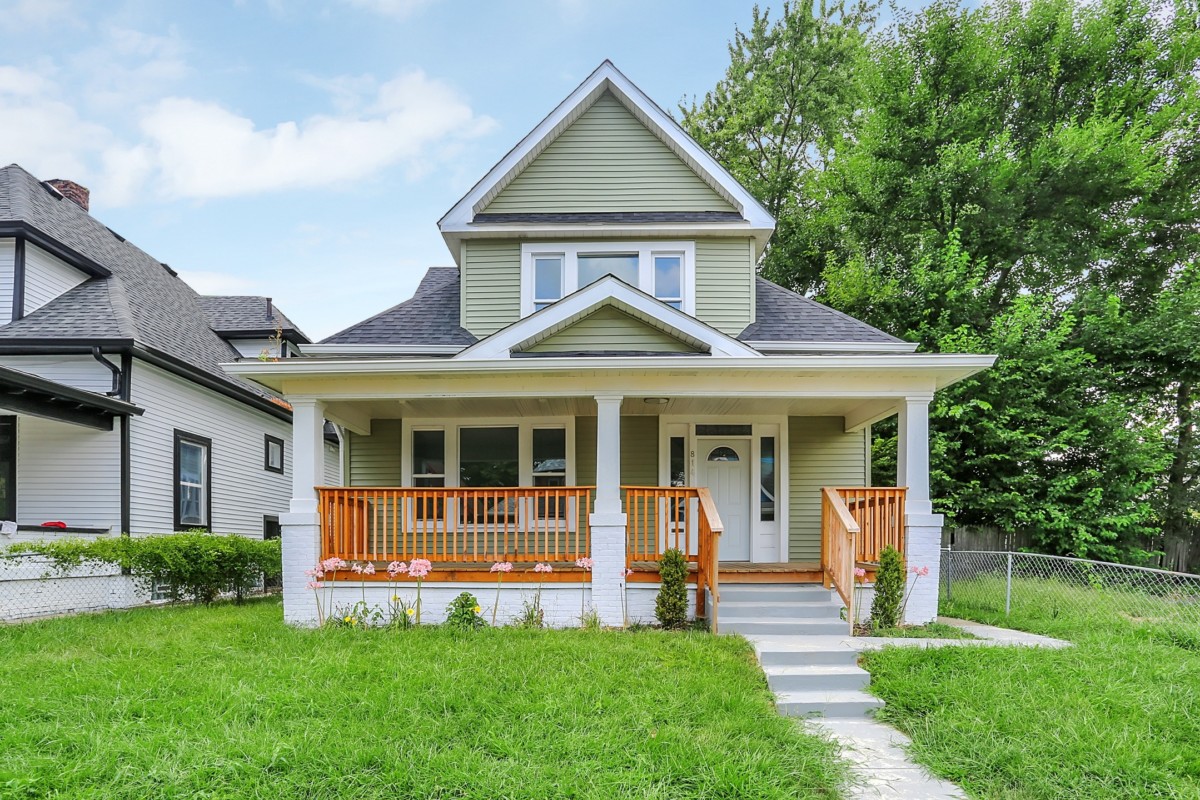 The craftsman bungalow is the quintessential bungalow home that you’ve likely pictured in your head. Filled with classic characteristics like shingled and gabled roofs and overhanging eaves, you’ll find these homes have earth-tone exteriors like browns and greens. 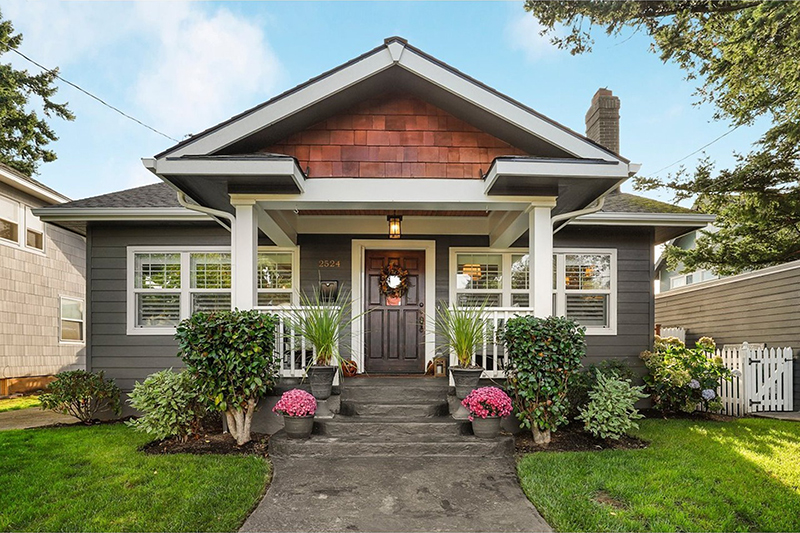 California bungalow homes are very similar to the Craftsman style, but their differences come down to the materials used to construct the exterior. The California bungalow typically uses shingle or horizontal siding out of woods such as Redwood or stucco, maintaining that natural feel.

Characterized by its brick exteriors, unfinished basement, and low-pitched roof is the Chicago style bungalow. Some Chicago bungalows have their entrances off to one side of the home rather than in the middle. Modern bungalow homes are the newer take on an old classic. You’ll often find different materials such as glass or concrete and light-colored exteriors mixed with clean lines while maintaining a low-pitched roof. 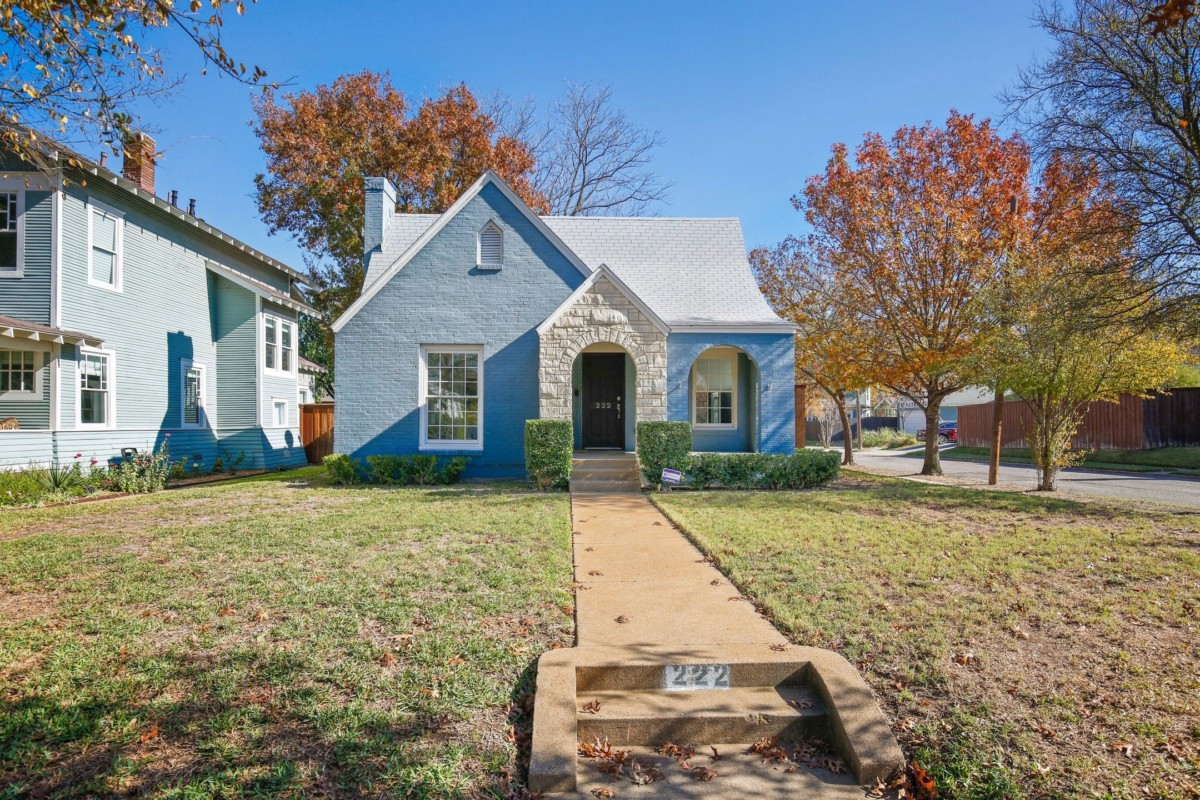 As with other Tudor-style houses, Tudor bungalows have more flair and detail than the standard bungalow home. You’ll likely find a steeply pitched roof, grand chimneys, ornate half-timbered exteriors, narrow and tall windows, and decorative details around the doors.

While not the same as Chicago bungalows, the Prairie bungalow has its origins in Chicago. The Prairie School, a group of Chicago architects including Frank Lloyd Wright, was at the forefront of this bungalow style. Prairie bungalow homes have strong and low horizontal lines, with a hipped or sloping roof and narrow windows. They also have wide chimneys, contrasting exterior materials, and decorative doorways, making this a unique spin on the classic bungalow style. 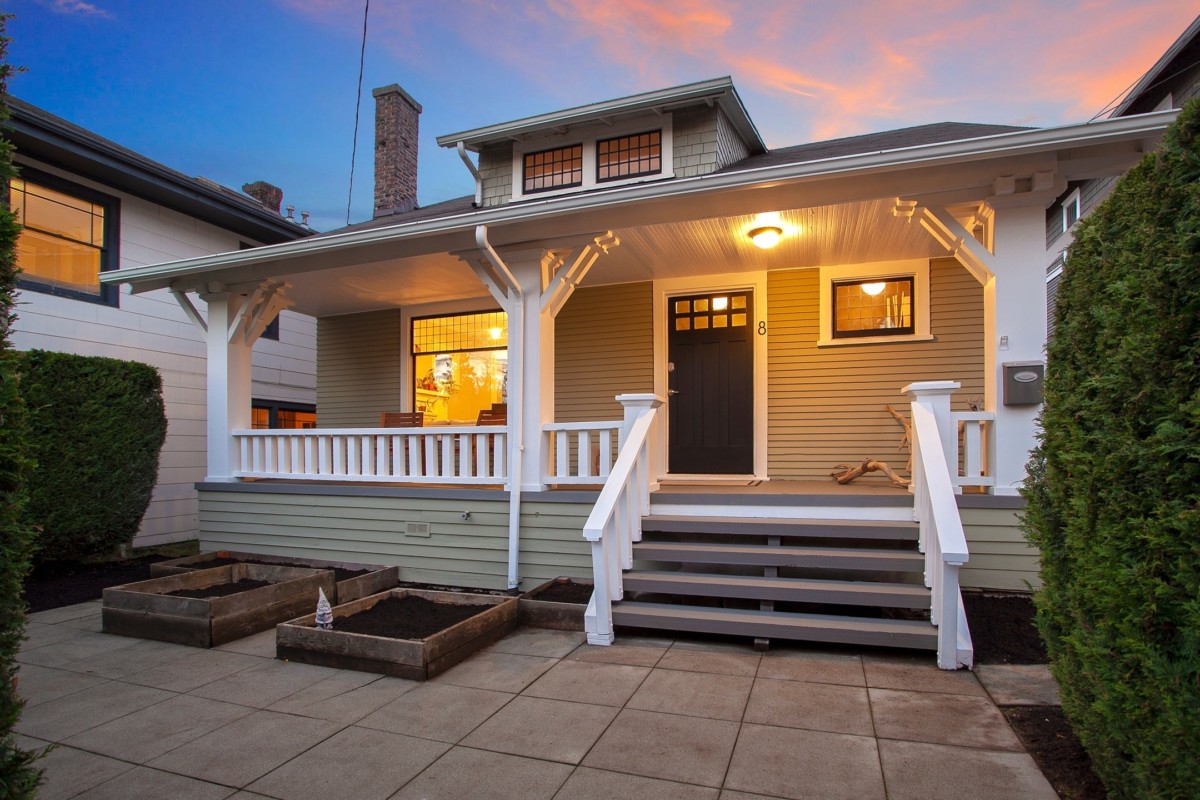 Pros and cons of owning a bungalow home

Bungalow homes have their advantages and disadvantages, just like any other home style you come across. Let’s take a look at the common ones.

Pros of a bungalow house

Open floor plan: A popular floor plan, bungalow houses usually have an open concept kitchen, living, and dining room, making it an excellent place for entertaining or hanging out.

Affordable: Since bungalows tend to be smaller in square footage and are typically one story, they’re often more affordable than larger homes. This can be a great option for first-time homebuyers or buyers looking to downsize affordably.

Privacy: With a single-story home, you can easily create a getaway away from the outside world. Think lush trees surrounding your home or shrubs that allow you to have more privacy than a two-story home.

Cons of a bungalow house

Small square footage: One of the biggest cons of a bungalow is its smaller size. However, if you’re looking for a smaller home, this may not be a disadvantage at all. But for those looking to have extra space for an activity or play room, this may not be the right style for you.

Smaller rooms: With smaller square footage comes smaller rooms. And that’s generally the case with the rooms in a bungalow home, which may not suit everyone.

Privacy: While privacy can be easier to achieve in a bungalow home, there is also an increased security risk of living in a one-story home. Ensure you have adequate home security, as all your windows and doors are located on the ground floor.

How to find a bungalow style home in your area

If you’ve decided that the quaint bungalow house is the right home for you, Redfin can help you find one in your area.

1. Go to Redfin.com and type into the Search Bar either the city’s name or the zip code (for example, Chicago, IL) where you’d like to begin looking for a house. Press enter.

2. Near the top of the next page, on the right side, you will see “All filters.” Click on that and scroll to the “Keywords” box near the bottom of the page.

3. Type the word “Bungalow” into the Keywords box and press Apply Filters. That’s it! All Bungalow style homes within the city name or zip code you entered will populate the page, and you’ll be able to begin your search. 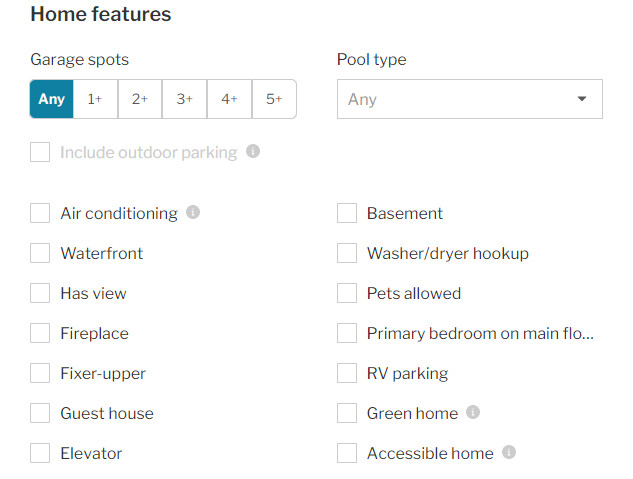 It’s easier to buy a Kia EV6 than a Hyundai Ioniq 5: Here’s why

Alexandria Ocasio-Cortez calls out Texas heckler who filmed himself harassing her on the U.S....

Centene’s 800,000-square-foot office building that’s been under construction in University City for the past two years is expected to be completed in the coming...

The long-vacant building has been tied up in lawsuits. But now a New York developer wants to embark on a revitalization of the property,...

Build-To-Rent Homes: What You Need to Know About the Future of Single-Family Rentals

Build-to-rent (BTR) homes are ideal for people who want the benefits of community living without the hassle of maintenance, mortgage payments, or HOA dues....

Everything You Need to Know About Move-In Fees